Some quick snippets of general interest.

The locals were so friendly, obliging and helpful it was a delight to be among them. (Of course we met a couple of snags – they are everywhere - but maybe we just struck them on a bad day, or maybe they have just moved there themselves and are not into the swing of being nice to everyone all the time yet.)

I was fascinated to find a bunch of bananas hanging at a couple of places in the main street for people to help themselves.

One of the tours we did had a “wedding group” on it. Seems it is quite common for people to come to the Island to be married.

They have their own radio station, which broadcasts locally some hours and takes some New Zealand programs at other times. I loved waking up to hear the NZ news headlines - and the weather forecasts take in half the islands in the Pacific. I believe they also have a limited hours TV channel as well but never saw it anywhere.

None of the locals bother to lock their doors or cars.  All the tourists do – mainly from fear that if they don’t, it will be stolen and they will be up for the savage ‘excess’ the car hire places charge.

The school has from Kindergarten to year 12.  It seems well equipped. The teachers come for a 3year contract, and each year roughly a third of them are replaced.

The school leavers usually leave the island to get further education or a trade, but it seems many return when they get married and have kids. They want their children to have the wonderful lifestyle growing up that they had.

Apart from the local paper (mentioned before) there are several other publications for tourists that seem to be produced either monthly or quarterly. They are all very informative and usually free. I came across two from 2899  - One termed Norfolk Island Lifestyle Magazine and the other Your World Norfolk Island.  Robin Nisbitt whose photos I admired earlier is the editor of both. They had a great map of the island, so I emailed him and asked for permission to use it for my blog and he agreed. What is more he sent me an updated version so I did not even have to scan it.  How great is that?

They have a hospital but anyone with a serious condition is medivac’d  out.  My friend had forgotten her tablets so had to go to see the GP. She did not have long to wait and it was covered by Medicare. There is also a dental surgery there and one of the 3 pharmacies in the town. 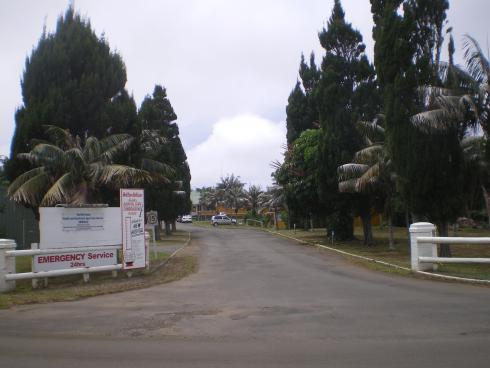 The main entry to the Norfolk Island Hospital. 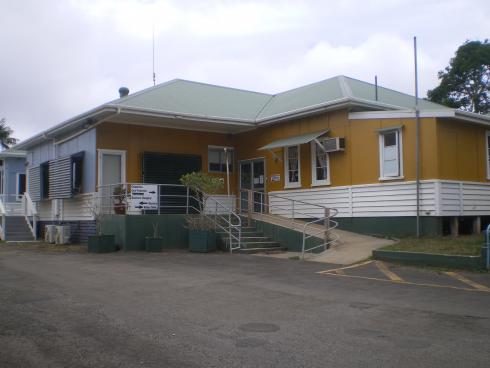 The main building for the Norfolk Island Hospital

We were told (when Anne-Maree broke her glasses and went looking for one) that the only Optometrist left the Island when it was “taken over last year by Australia”, and now only comes in for a week every 3 or 4 months – from Australia, where he moved to in protest at what was happening to Norfolk. (Make sense of that if you will!)

The RSL has great meals, and live music with some wonderfully talented locals. They claim that for both World Wars the enlistment from Norfolk Island was the highest of any of the Commonwealth Countries per head of population. They also have a wall where they feature a photo of all of their past members who are no longer alive. They say it is the only RSL who has this and I have to say I have not seen it anywhere else. (Probably not practical to do anywhere else either.)

There are few bores on the island but as it affected the water table no new ones are able to be sunk. Mostly they exist on tank water and every bit seems to be carefully collected and stored. There are also signs asking you to conserve water by limiting showers to 4 min and not to “run” the water when washing hands/doing teeth etc.

The locals all said the few showers of rain they had had in the few days prior to our arrival and the first few days we were there had been most welcome and had “greened the place up”, but most said it had not made much of a difference to the level in their tanks. It did not seem to have had any affect on the creeks either – most of which were dry. 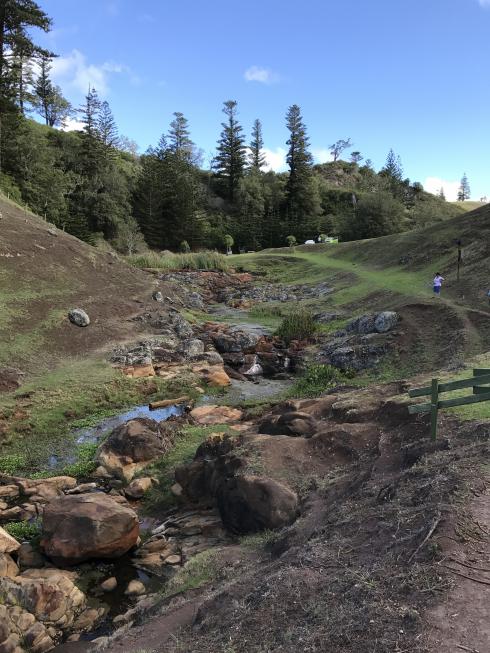 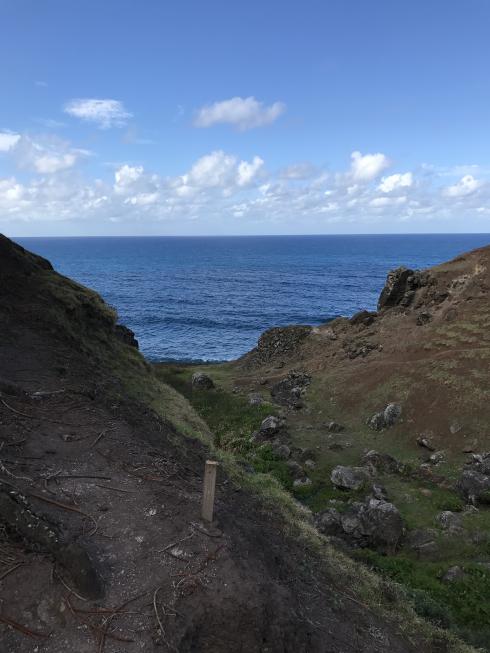 The mouth of Cascade Creek where it would normally cascade down to the sea.

Most tourists get a hire car. These are delivered to your accommodation for you to collect as we did, and you leave it there when you go. There are thousands of them running around the island and after a while you get to be quite good friends with some people who keep turning up at the same places you do.

There are roughly 60 places providing accommodation, and it ranges from basic huts to resort style, so you are sure to find something you like.

The Norfolk Island Pine is not actually a true pine at all – it is an Auracaria – Auracaria heterophylla.  It is related to the Cook pine of New Caledonia,  the Hoop and Bunya pines of Australia and the Monkey Puzzle Tree of South America.

During the convict settlement days they produced a mountain of pork a week to feed the community and convicts. They still have their own pigs so all the pork we ate was locally bred and butchered. Most of the meat is also locally bred and butchered, but I did note the butcher shop had some lamb and was told there are no sheep on the Island, and we were offered some NZ steak at a couple of the places we ate. 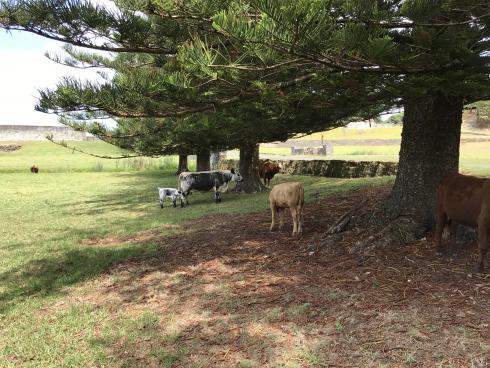 Unusual breed of white cattle that none of our tour guides could identify for us. 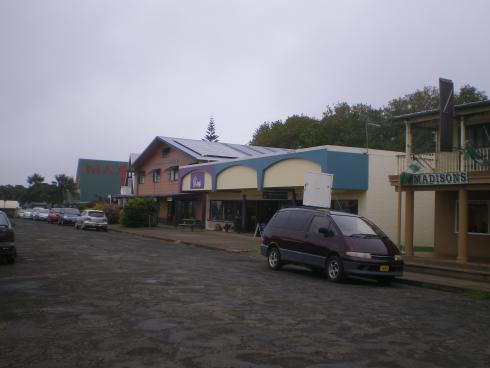 Shops in the Village part of "Burnt Pine"

Australians and New Zealanders can freely buy real estate on Norfolk Island. This has not always been the case but is now.  See http://firb.gov.au/resources/guidance/gn)01/  to check out any questions you may have. I picked up a list of properties from the very helpful folk at Norfolk Island Real Estate, and while they were priced from $175,000 for “an oldie but a goodie” 3 brm close to school and town, to a few at $1.5 million for some luxury homes on acreage, the vast majority seem to be between $300,000 and $500,000. If you want to know more  check out www.norfolkislrealestate.com, www.realestate.com.au or from L.J. Quintal Real Estate on www.quintalhomes.com and see if you can find something to interest you. I noticed signs in a couple of businesses to say they were for sale – so you may be able to buy yourself a business there too if you are so inclined.

Police officers are furnished by the Australian Federal Police(AFP) and supported by locally engaged Special Constables. I was told that most offences they encounter are traffic offences. (I found it interesting that at different times I heard 2 different Tour guides asked by a tourist “How many Police are on the Island” Both answered “Too Many”. When pressed for a number they said they did not know.

Both Commonwealth Bank of Australia and Westpac have offices on Norfolk and both have ATM’s.

When Bass and Flinders circumnavigated Tasmania they did so in the “Norfolk” – which was the first boat built on Norfolk Island. There is a scale model in one of the Museums.

The Phone directory has a special section at the end – where people are listed under their nicknames. Seems many are only known by their nickname so no-one could find them in the normal phone book as they didn’t know their name. 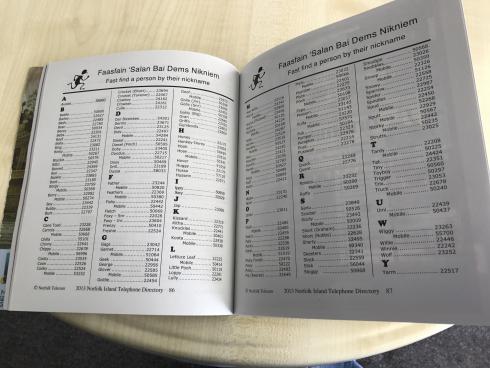 The special section of the phone book where people can be listed under nicknames. 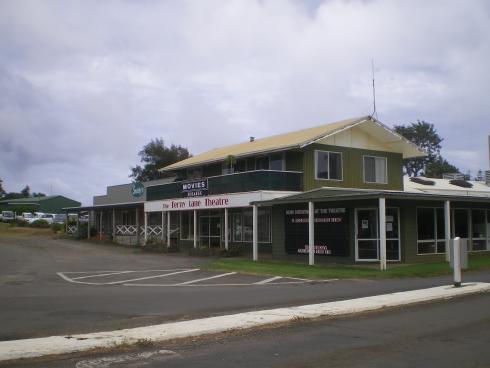 Ferry Lane Theatre where Movies are shown and plays are performed.

There is a Movie theatre which shows the latest movies. It is also where the play "The Trial of the Fifteen" is performed every Wednesday night.

Cascade Pier, and Cascade creek were named by Captain Cook because of the huge waterfall that cascaded down to the sea in the northern bay. However when we were there it was doing no such thing. The rocks clearly show how wild it has been at some time, and why if the water was flowing feely Cook would have been inclined to name it as he did. 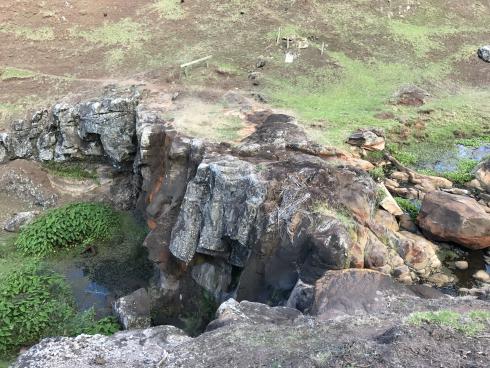 The rocks over which the Cascade river would normally fall on its way to the ocean. 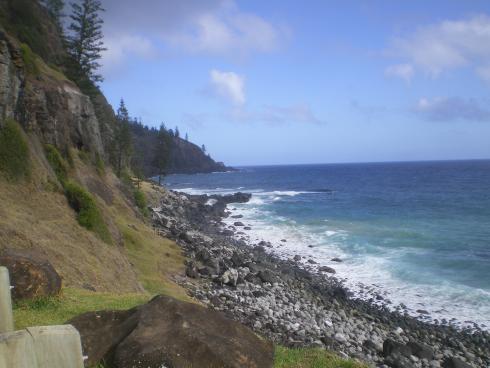 Looking west from Cascade Pier towards the mouth of Cascade Creek.

The weather at Norfolk can change quickly and despite it being only 8kms by 5kms in size, the rainfall can differ widely across the Island, so a Weather station is critical.  The Norfolk Bureau of Meteorology Office is at the airport and part of Australia’s network. The latest facility was built in 2003 and is very up to date. It is staffed by qualified operators, who are posted on rotation, to all the stations across the network.

Many of the trees and plants had a lichen on them. A couple of people who I asked about it said it was only on the dead sections of the tree/plant. That is not so. I saw many very alive trees covered in it and wonder how much longer they will be alive. 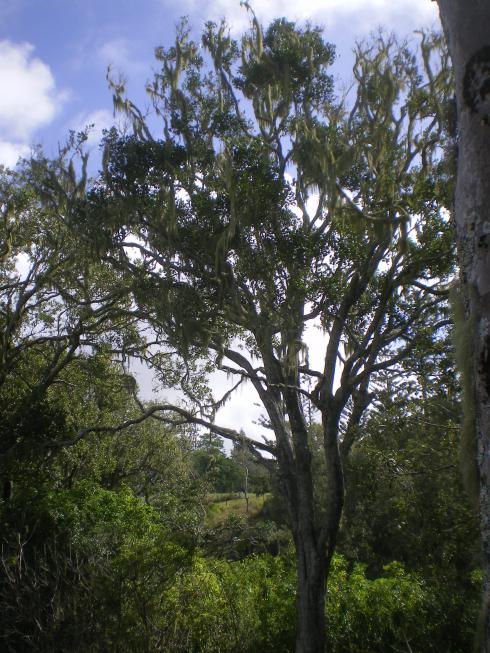 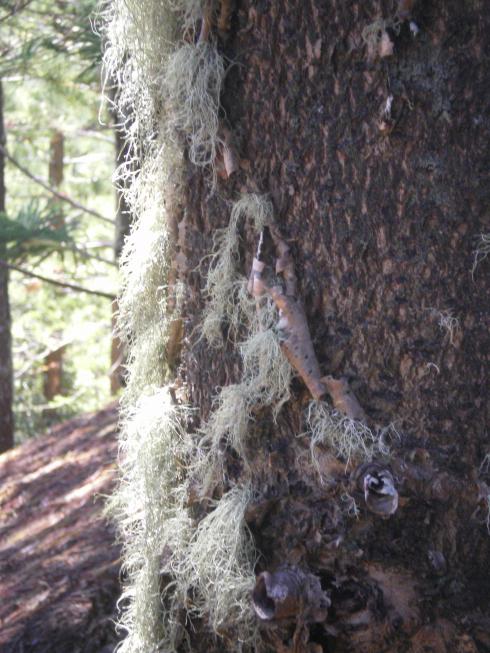 Some of the old stone bridges being used have been there since convict times. Obviously they were well engineered.

I found a very substantial set of stone stairs going down to a creek – some of which was also stone lined - at Emily Bay. I wonder if that was used as a bath at some point. 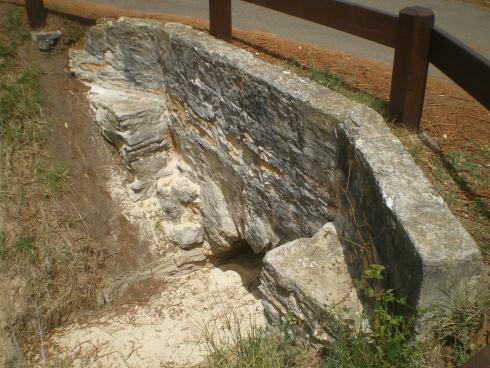 One of the bridges that dates from convict times. This one between Slaughter Bay and Emily Bay. 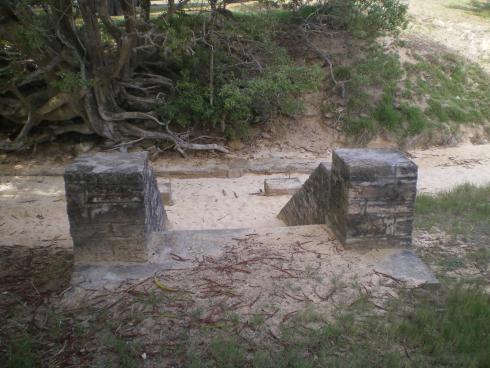 Captain Cook is well thought of here and there is a memorial to him in the north of the island and then a wide, mowed path down to a viewing platform which gives wonderful views of the coast and of the many birds who come there - some seasonally. 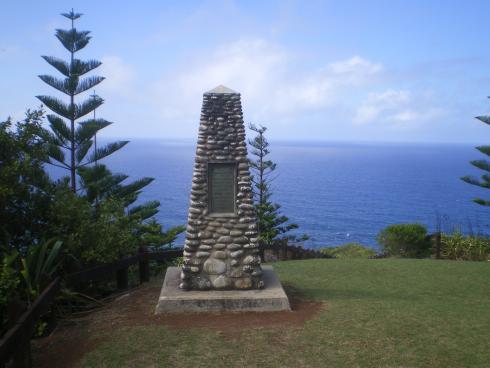 The monument to Captain James Cook. 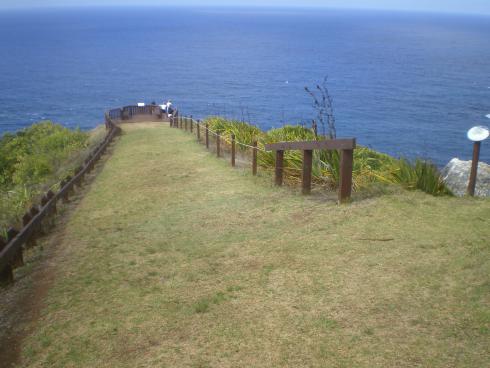 The path from Captain Cook Monument to the viewing platform. 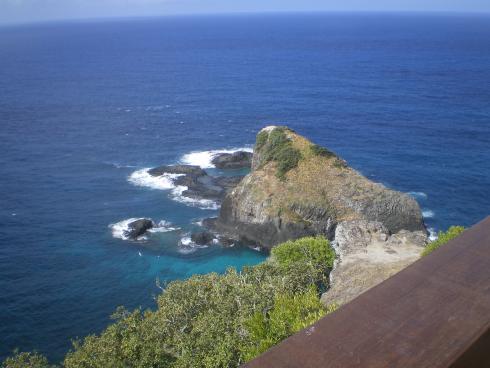 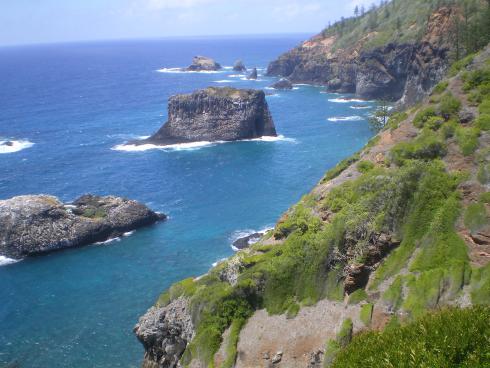